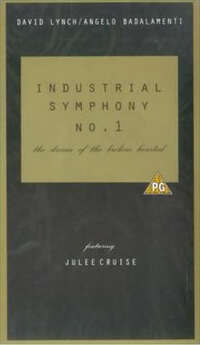 Industrial Symphony No. 1: The Dream of the Brokenhearted

The presentation opens with Cage and Dern engaging in a telephone conversation, the gist of which is that he is breaking up with her, to her great sorrow. Though they are never named as such, the two characters bear a striking resemblance to Sailor and Lula from Lynch’s movie Wild at Heart. The rest of the play is a hallucinatory “dream” that the Heartbroken Woman has.

The show takes place on a stage, the main props being a tall metal girder-like structure, and an abandoned shell of a car, with flickering lights and cacophonous sounds used to disturbing, nightmarish effect. Much use is made of actors suspended from ropes, flying and falling, as well as dancers.

Julee Cruise sings on tracks 1, 2, 4, 8 and 10. These songs are all from her first album, Floating Into The Night (1989), apart from track 1, which is from her second album, Voice Of Love (1993). They are the normal, studio recordings – the songs are mimed. Her voice can also be heard in track 6, in which she gets pushed into the boot of the car. In track 8, the boot opens and she sings from it, her face superimposed on a TV-screen. One recording, “Rocking Back Inside My Heart”, is also featured in Twin Peaks (for which Cruise recorded a vocal version of the theme).

Michael J. Anderson (known for his role as the small, dancing Man From Another Place on Twin Peaks) is featured on track 3, patiently sawing a log of wood to Badalamenti’s discordant music. He is also part of the stage ensemble on track 5 (instrumental), along with a tall, demonic reindeer-like figure. Finally, on track 6, he reiterates the opening dialogue between Cage and Dern, accompanied by a clarinet-player and a non-speaking actress playing Dern’s part.

Track 9 is wholly instrumental, with a background of dolls being lowered from the roof on strings.